It’s been a wild week around here as we all get organized for our first March Break vacation as a newly constituted family of three. Or not exactly three, because my parents have decided that this is the year to take everyone to Disney, which means that the entire Hilton clan (youngest member aged 6 weeks) is heading to Orlando on the weekend. It will be crazy and exhausting and distracting and warm. And I can’t wait.

I’m feeling better, thanks. Another February is over, and we are all still standing. This is cause for celebration, and a ritual burning of Palo Santo wood (thanks for that, too).

You asked in your last letter about depression. I’ve had it since I was a teenager, although I wasn’t diagnosed until my late twenties (while articling at a law firm, not coincidentally). My own terror of mental illness prevented me from getting treatment for many years, and one of my few regrets in life is that I wasted so much time pretending that I was perfectly fine. Even still, I told very few people during my high-powered career years, and during my marriage. Self-employment as a writer and marital separation have been very freeing in this sense, as the consequences of external disapproval are relatively minimal.

And speaking of external disapproval, let’s talk about motherhood.

I’d love to hear more about what your ‘good mother’ looks like. I think we all come to motherhood with a factory setting, a series of built-in expectations that we’ve imported from our own families, and created in opposition to our own families, and absorbed from the culture around us (The Cosby Show, ironically, springs to mind).

I happen to think that any mother who provides the necessaries of life (food, shelter, clothing), and who makes her children feel loved and safe, is a ‘good mother’. Does anyone seriously disagree with me on this point? No? In that case, I think we should stop beating ourselves up over the things we believe we are failing at as parents (cooking perfect family meals seven nights a week, producing musical prodigies, organizing elaborate camping trips) and celebrate the things we do well.

For example, I don’t ski. I don’t like skiing. I don’t like the cold. I don’t like driving for hours in bad weather to find a place where it is even possible to ski in the flatlands of Ontario. But I’m Canadian, so for a long time I obsessed over the idea that my children should learn to ski. I looked into programs for them, and tried to encourage my kids to sign up for them. But you know what? They aren’t interested in skiing (or in hockey, for that matter). Call it nature, call it nurture, it doesn’t matter. They are Canadian children who don’t ski (or play hockey).

So be it. They like reading, and I care more about that.

I love being a mother of sons. I grew up in a house of girls, one of three sisters, and went to a girls’ school and a girls’ camp, so my parenting has an anthropological quality sometimes. Have you seen Boyhood yet? You must. It is stunning for many reasons, one of which is the emergence, in real time, of a man from the body of a boy. But it also captures the depth of a relationship between a mother and her son, and suggests, eloquently, that you can make a lot of mistakes as a parent and still produce great kids, just by being a steady and loving presence in their lives. It’s wistful and heartbreaking and harrowing and comforting, all at the same time – not a bad description of motherhood itself, come to think of it.

Motherhood is not a competition. It’s a relationship. To be a good mother, you need to use what is best in you – your strengths, your talents, your joys – to cultivate a relationship that brings out the best in your children. Focus on what you love and do well and let the rest go.

Have a great March Break. 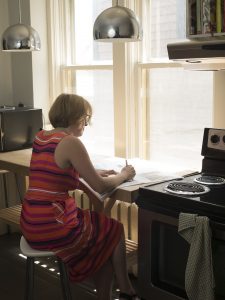 2 Responses to “Motherhood is not a competition”