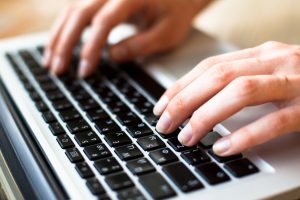 I first discovered that I was a social media guru, at least in the world of fiction writers (an admittedly low bar), when CBC called to interview me about it.  I was incredibly flattered, but knew it was only a matter of time before I was revealed as a shameless imposter. My long-suffering spouse, who has been my on-call computer technician for the past sixteen years is only too happy to confirm: I’m technologically incompetent.

Last May, however, I self-published my first novel, The Hole in the Middle, as an e-book.  I promoted it through a range of social media channels, and suddenly I had 13,000 downloads, an agent, a book deal with HarperCollins, and a reputation as a social media expert.

But here’s the honest truth: I opened accounts on Twitter, Facebook, LinkedIn and several other sites less than a year ago so that I could build an audience for my book.  I’d resisted them for years.  They seemed like vehicles for narcissism at best (‘Look, everyone!  I’m having a coffee at Starbucks!’) and for escalating insecurity at worst (‘I thought my last tweet was hilarious.  Why hasn’t anyone followed me?  Why?).  But, having decided to launch The Hole in the Middle for Mother’s Day, I was on a tight timeline.  I needed to get friended, asap.

The most useful advice came from my friend Leah Eichler, who advised me that social technologies generate true connections between people when they mimic familiar social behaviors.  Twitter, she said, was like passing notes in class, while LinkedIn was like handing out your business card at a professional dinner.

This made sense to me.  On Facebook, for example, the best posts seemed like the sort of news you’d call your sister or close girlfriend about (‘Did you see that Jimmy Fallon clip?’ or ‘The recipe you gave me for spicy brisket was amazing!’ or ‘The kids decided to cut their own hair!’); while the worst ones reminded me of the overwrought Christmas letters that seem to have fallen out of vogue with the dawn of Facebook, where you can now post updates on your family’s perfection multiple times a day instead of only once a year.

Happily, observing and recreating social behavior is something that I, and every other writer that ever put pen to paper (or finger to keyboard), can do.  I tried to ignore the medium and focus on the message.  I passed notes on Twitter (‘I don’t think your cat likes you as much as you think it does’) and I phoned my girlfriends on Facebook (‘Oh my god!  I just saw my book in a bookstore!).  And the more I did it, the easier it got.

No one is more surprised than I am that all of these social communications, over the course of a year, have produced genuine feelings of connection.  I’ve rediscovered friends that I’d lost touch with over the years.  I’ve met new people through a shared interest in books and writing.  I followed one friend’s cancer diagnosis and treatment; cheered for others in real time as they competed in marathons, charity bike races and Tough Mudders; and invited neighbors to shelter at my house during the Toronto ice storm – all on social media.

And here is what I learned from my year-long immersion course (which, now that you know I’m an imposter, you can take or leave): the true magic of social media is not that it mimics real-life behavior, but that it produces social ties in the real – not merely the online – world.  My foray into social media has broadened my circle of friends and colleagues and made my life richer and more interesting.

But, social media expert or no, I never use emoticons.  You have to #drawtheline somewhere.