I’m getting an early start this morning, and because it is so dark outside, and because I’m tired, I am completely disoriented. I have to keep reminding myself that I have already slept, had breakfast, packed one child (the one who isn’t sick) off to school and settled into my work day. The fact that I have to do this – remind myself of something so simple and obvious – is one of many examples in everyday life of how much of our behaviour is patterned and based on familiar external cues.

And this, in turn, is one of the answers to your question last week about why midlife changes are perceived as a crisis. I like this question, and have thought about it a lot in my own context. I used to describe my shift into a writing career as the result of a midlife crisis, partly because it got a laugh from the audience, and partly because I thought of it that way myself. But I’ve stopped doing that. I’ve decided that it is too reductive, dismissive, and even pejorative a phrase to describe what has been, in fact, a period of transformative growth and creative flourishing.

Having said all of that, change scares us at a fundamental level. We don’t think that we are good at it. We cling to the (misguided) idea that people don’t really change, and it comforts us, giving us a sense of control and stability. And, of course, change invites failure, which we fear most of all.

Small changes can throw us off for months or even years. Think about how long it takes to settle into a new house, for example, or a new route to work. Long after we should have rewired our brains, we still find ourselves looking for the forks in the wrong drawer, or getting off at the wrong subway stop. And it makes us tired, because every time we have to substitute a real decision, one that requires our attention and consideration instead of allowing us to operate on autopilot, it takes energy.

But here’s the good news. According to Charles Duhigg, author of The Power of Habit: Why We Do What We Do in Life and Business, “Routine basically gives us the mental freedom to think about what’s actually important…Almost every single species that has survived has the ability to take routines and make them automatic. That way you have cognitive power to invent spears and fire and video games.”

In other words, all of those routines are liberating space in our brains that could and should be used to contemplate change.

My own view is that we are far too wedded to the notion that change is threatening, and that it prevents many of us from reaching our full potential. There is no question that change is difficult (we will all spend a lot of time looking for forks and getting off at the wrong stop, no matter how adaptive we are), but it is also extraordinarily energizing.

This is not to say that I wake up every day and think, “Excellent! Another day of adapting to unfamiliar experiences!” I find change tiring too, even though I have come to appreciate and even seek it. But the rewards of change are as large as your own imagination.

This week, the first copy of the US edition of The Hole in the Middle rolled off the presses and arrived in the mail. Here is a picture of me, right after I opened the envelope. Do you see the same thing that I see? Wonder, astonishment, joy, and more than a little disbelief? 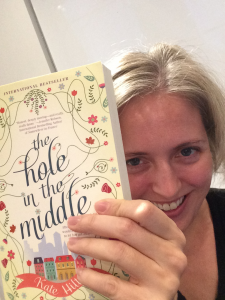 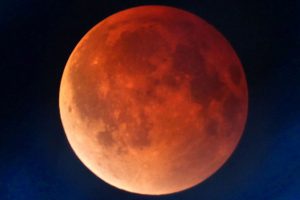 I passed a big milestone this weekend.

It’s been a year since my husband told me he was leaving. At the time, it came as an extremely unpleasant surprise, and today it still remains something of a mystery.

I’m not going to say that my house burned down and now I can see the moon (as the saying goes). No one wants her house to burn down, and you can see the moon just fine by stepping outside once in a while (except when there is a rare and beautiful eclipse, in which case you can’t see it at all). I don’t think that change, even necessary change, requires a catastrophe to bring it about, nor do I believe that every catastrophe is for the best, necessarily.

But if your house/life burns down, the process of rebuilding is intensely conscious. The life you had before the disaster took shape organically, over many years, and it reflected both the compromises of partnership, and the preferences of your younger self. The life you now contemplate will express your present identity. So what should it look like?

Adversity isn’t identity, and no one would want it to be. We are infinitely greater than the sum of our negative experiences. But it is human nature to reject the idea of pain without purpose. I think that our sense of a true self, of an identity, often comes into focus through our attempts to understand painful events.   (On this topic, I was very moved by Andrew Solomon’s thoughts on how the worst moments in our lives make us who we are.)

When you emerge from the shell of your former life, you feel as you imagine a newborn must feel: dependent, disoriented, frightened, and battered by overwhelming emotions and sensations. But then, as your agency returns, you begin to observe your own actions with interest. Freed of patterns and routines, how do you choose to spend your time? With whom? Which activities do you anticipate with pleasure, and which ones with dread? And from these basic cues, you can begin to build a life around your identity, instead of crafting an identity to fit your life.

I wouldn’t have chosen the fire, but it has generated a new life that is wholly mine. Because if your house burns down, why content yourself with simply looking at the moon? Why not shoot for it?

P.P.S. Really looking forward to seeing you in person (!) at the International Festival of Authors party.  Both of us in the same room at the same time: an event almost as rare as a lunar eclipse.  We will need photographic evidence. 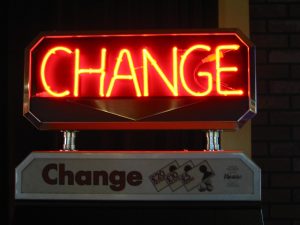 Has anyone said that to you recently? What was your reaction? Did you think the person meant it as a compliment or a criticism?

I ask because I’m interested, in life generally, and in the book I’m writing, in how we construct our identities. And I think that many of us resist the idea that we change. Sure, we change the music we like and the fashions we admire, but our fundamental personalities don’t change, right? Identity isn’t fashion. Identity is fixed.

In fact, the opposite seems to be true. The current neuroscience research suggests that we are constantly evolving, or, as Dan Gilbert puts it in his delightful TED talk: “Human beings are works in progress that mistakenly think they’re finished.”

I accept that this is true intellectually, but until recently, I’ve resisted it on an emotional level. I’ve always found the idea that people change to be quite threatening. What if you invest all your energy into a relationship – a marriage, a friendship, a work partnership – and that person changes? How can you control that? How can you protect your investment?

You can’t, obviously, which I learned the hard way on several fronts.

When you go through divorce, people tell you that you’ve changed. Usually the person who no longer wants to be in a relationship with you will tell you that (and it isn’t intended as a compliment). But friends will tell you that as well. Some will mean it as an encouragement, as in the end of your marriage will allow you to grow further into the person you are meant to be. Some people don’t, as in, I can see why your marriage fell apart, because you are one of those people who changes, but I’m not, so my marriage is safe.

And because you are, in fact, changing, some of those people will remain friends, and some of them won’t.

Which brings me to the question you asked in your last letter: “Have you via your writing or otherwise ever not been liked?” Yes, I have. And it sucked.

But I’m getting better at dealing with it. Because I’m changing. 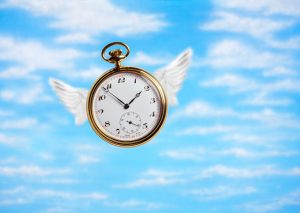 Time is indeed flying by. The evenings are getting cooler, I’m ordering school uniforms and lunches and registering for fall programs, and my book deadline is getting closer week by week. What a summer, though! Such long stretches of glorious weather. We’ve been lucky.

You asked if I was motivated to write The Hole in the Middle by an anxiety about the passage of time. In short, yes, I was. I had a disconcerting sense, as my 40th birthday approached, that I was spending my precious time on the wrong things, professionally speaking. I was in a job that was very senior and challenging, but my work was largely invisible. My role was to contribute to the individual legacy of my boss, and to the overall reputation of my institutional employer.

I began to feel that I was hiding in some way, and was in danger of never realizing my full potential. And I remembered that I had always wanted to write a book. And I asked myself if I still intended to keep that promise to myself, and if so, when.

Five years later, my life is transformed. I’m a professional writer with a bestselling book that will come out in the US in January. I’m halfway through the writing of my second novel. I’m not married anymore. I’ve moved. I’ve lost friends. I’ve gained friends. I have a pen pal. My boys are old enough to be proud that their mother wrote a book.

As for my favourite quote about the passage of time, I give you Robert Frost:

Her hardest hue to hold.

Her early leaf’s a flower;

But only so an hour.

Then leaf subsides to leaf.

So Eden sank to grief,

So dawn goes down to day.

Nothing gold can stay.

Much has been written about this deceptively simple poem, but my own interpretation is that a life fully realized – fully lived – includes loss, change, and grief. And perhaps, understanding that reality, we can embrace change with less fear and less regret?