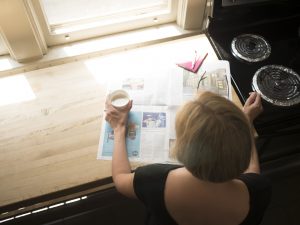 This morning I woke up and discovered that my inbox was full of congratulations on my LinkedIn work anniversary.

Exactly one year ago, I apparently made a point of changing my LinkedIn profile and declared to the world that I was a writer (and a consultant, because you never know).

And what a year it turned out to be.

My novel, The Hole in the Middle, spent 11 weeks on the bestseller list in Canada. I made dozens of personal appearances at book clubs, libraries, bookstores, women’s organizations and writers’ festivals, on radio and — astonishingly — on television. I signed a two-book deal with a U.S. publisher. I travelled across the country, met wonderful friends, and discovered in myself an unexpected talent for reinvention.

These successes coincided with my most excruciating failure, as my marriage of 14 years ended. I parented my children through the dark days of separation, uncertainty and grief. My dog died. I lost friendships that I had cherished, and gained an unsettling perspective on the essential impermanence of a life built with care and effort. I learned how to ask for help, and how to receive it with grace. I held tight to my parents, my sisters and my sons, and was grateful for them.

“You’ve changed,” people said to me over the course of the year. “You’re different.” Sometimes it was said with admiration, and sometimes not. It made me uncomfortable, either way. A friend said, “You should thank them. You’ve worked hard at change. It’s what you wanted.” And she’s right.

It is fashionable these days to deny the existence of failure, to suggest that failure is merely a mechanism that pushes you toward your destiny. I like this idea. I find it attractive and comforting. I also think it is absolute nonsense, a rationalization of the most fantastical variety. Failure is the ugly twin of success, and success cannot exist without it.

Failure is a necessary ingredient in reinvention. That is why reinvention is hard and lonely and frightening. But reinvention is also exhilarating, and rewarding, and worth the cost it exacts from those brave enough to embrace it.

And so I gratefully accept all congratulations on my work anniversary. It is a milestone worth celebrating.