I have an issue with Mother’s Day. 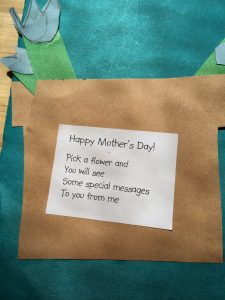 Has there ever been a holiday better designed to elicit seething resentment than this one?  It is a day that promises a warm bath of gratitude for your maternal contributions to the family, but more often delivers teacher-assigned crayon-and-construction paper cards, along with a gift certificate obtained by your frazzled husband after running out to the nearest store on foot while leaving you with the kids (on Mother’s Day).

And then there are the other mothers: your mother, your spouse’s mother, grandmothers and various hangers-on who believe, perhaps fairly, that it’s their turn to have a decent Mother’s Day celebration, now that there is a grown women in their lives capable of delivering one.  That’s you, by the way.

In fact, I’ve concluded that the only person who can give you what you really want for Mother’s Day is you.  And it’s not a spa day, or chocolate, or flowers, although they each have their place in a woman’s life.

I think what you really want for Mother’s Day is to know that there is still an essential ‘you’ that exists outside the many roles that you occupy – mother, wife, daughter, friend, boss, employee, volunteer – and to know, also, that your particular, unique, imperfect you is someone worth celebrating.

Exactly a year ago this week, I gave myself an extraordinary gift for Mother’s Day.  I self-published the novel I had been writing secretly for four years.  That novel, The Hole in the Middle, explores the inner life of an overburdened and dissatisfied working mother who feels that she is failing on all fronts.  And even though it wasn’t, and isn’t, autobiographical, it took a staggering amount of courage to put it out into the world, to claim a new identity for myself as a writer, and to start talking about the complex feelings that many, if not most, women have about motherhood and marriage.

How many of us truly understood at the beginning that a wedding is the opening chapter of a story, not the conclusion, and that the narrative arc of a marriage has joy, yes, but also rage and sorrow and disappointment and misunderstanding – even in the happiest of unions?   How many of us knew that we would love our children so much that it would terrify us, but that we would also resent the erosion of our independent personhood, and wonder why our husbands didn’t feel similarly eroded?  Or how much more often we would dwell on our failures than on our successes as wives and mothers – and how angry it would make us that our spouses weren’t similarly afflicted with self-doubt?

Few of us, I would bet.  Which is, perhaps, why we lie so much to each other and to ourselves about how satisfied we are with our Facebook-picture-perfect lives.

The gift I gave myself a year ago was to step beyond the safe territory of roles and give my essential self some room of her own.  It’s been scary, often, because change is hard even when necessary and welcome.  But mostly, it’s been liberating.

This year, give yourself a Mother’s Day gift that matters.  Step outside the roles that you perform so very, very well, and give yourself the gift of self-knowledge, of self-expression, and of self-worth.  No one else can give it to you, and you deserve it.