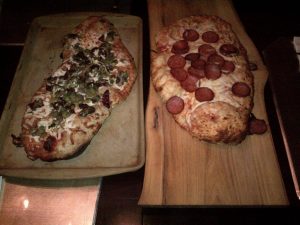 I’ve been thinking lately about an old Leonard Cohen poem that warns of the diminishing returns of perfectionism: Ring the bells that still can ring/Forget your perfect offering/There is a crack in everything/That’s how the light gets in.

I repeat this phrase over and over to myself as a kind of mantra, which allows me to celebrate family dinner as a journey rather than a destination, a process rather than a result.  This is a survival mechanism, since perfect victories have been few and far between on this road so far.

I’ll be honest: last week was a gong show.  I got the flu, which created a domino effect of no groceries in the house and weakened wills all around.  You know what?  I don’t really want to talk about it.  Nothing good happened.

This week though, we started strong with homemade pizza.  The boys got a kick out of stretching the dough, which was the first time I’d managed to get them involved in dinner preparation, which every book on family dinner insists is key to the overall success of the project.  Here’s the best thing about making pizza:  You can make more than one!  Some people can eat pepperoni pizza, while others may choose to have wheat crust with leeks, field mushrooms, sundried tomatoes and truffle oil (to pick a few ingredients at random).

The crust was too thick, and a little soggy, and the accompanying salad was mostly ignored.  But our youngest son, and most hostile food critic, declared: “We should do this more often.”  We had Songza on in the background – a glorious ‘80s and ‘90s ‘guilty pleasures’ mix – and the kids popped out of their seats every few minutes to bust out some dance moves.  All I can say is that you really haven’t appreciated the pure brilliance of ‘Insane in the Membrane’ until you’ve seen a 6-year old dance to it.

We’ll deal with table manners next year.  That’s how the light gets in.