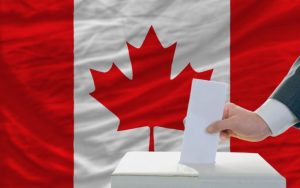 The fall is racing by in a blur of turkey dinners and Halloween decorations and soccer games and homework and karate lessons and puberty and literary events. And political chatter, of course, because today is the Canadian election. Have you voted yet?

On the subject of the election, I’ve obviously aged into a new demographic in the past four years: I know a statistically significant number of people running for office. As I commute across the city every day, I see people on lawn signs that I knew in law school, or in university, or in a previous career. Other friends are holding fundraisers or running campaigns.

We’ve arrived. We are officially entering our professional power years. So, what are we going to do with them?

This was, I recall, one of the reasons we started The Pen Pal Project. I haven’t spent much time talking about my career in these pages, not because I haven’t been focused on it, but because I’m superstitious about work-in-progress, and because other life events seemed more letter-worthy. But you asked in your last letter about how I write, how I keep the threads of the story from unraveling in my head when real life is grabbing at the ends and pulling.

So it seems like the right time to mention that my second novel is due at the beginning of December, and it appears that I will hit my deadline. This means two things. First, that I am writing furiously and am displaying frequent hermit-like behavior, with an occasional exception made for the aforementioned literary events (I still feel like a fan-girl, but not like an imposter, which is progress). And second, that amid all of the personal chaos of the past year, I have managed (almost) to write a book.

It occurred to me recently that the crux of identity is in the doing. That is to say, we are what we do. I’ve spent more time than I’d care to admit over the course of my life asking the question Who am I and what is my purpose? Lately I’ve had very little time for that kind of reflection, and have been fixed on present-tense questions, such as How am I going to get through this? Different.

The interesting thing that happens when things fall apart is that your life boils down to certain essentials. You see a much smaller circle of people, you participate in a much smaller range of activities, and you engage in a narrower set of intellectual pursuits. You do not have the energy to perform. You are doing only what is essential for your survival, and it reveals an incredible amount about your identity without any effort on your part.

I’m a writer. I discovered this because even in the worst moments of my life, I kept writing. Characters pushed themselves into my imagination, and even when I was too tired to write their stories, I could still find the energy to write my own, here in these letters to you. So I’m electing to spend my power years writing. What are you going to do?

The deep freeze persists. Just leaving the house to get the groceries or do the after-school pick-up feels like a polar expedition. We are living in the Canada of Canadian Tire commercials, and of the American imagination. I have a friend who has built an igloo in her backyard.

February does, of course, offer the pleasure of huddling in your soon-to-be former home, organizing your taxes, working out the details of your separation agreement, and contemplating the remnants of your shattered domesticity, for those who enjoy such activities.

Perhaps I should mention, since we’re tackling some socially awkward topics this week, that February blues come in a rather dark shade for me. Depression and anxiety simply adore February. It is their favorite time of the year.

So. You want to talk about God.

For the record, I did grow up going to church, in a low-key Protestant congregation, but I’ve never been a believer. I’m not a great joiner, either, and I tend to get prickly when people tell me what to think. I’ve always preferred the crisp certainty of the visible, ‘rational’ world to the messy excesses of spirituality in all its forms.

Consequently, religion has played no role in my parenting. I have occasionally felt that this is a gap in my children’s education. So much of human history is about the clash of religious traditions that I sometimes wonder how my children will make sense of it all without any personal experience of religious life (other than holiday celebrations, carefully stripped of any sacred overtones).

In the past few years, I’ve become much more open to conversations about spirituality. Part of this shift is a function of life stage, I’m sure; we focus more intensely on these questions as we age. But I recognize, too, that the search for more meaningful and creative work has changed my approach to, and probably my expectations of, other aspects of my life.

Have you read Viktor Frankl’s book, Man’s Search For Meaning? I read it for the first time recently, and it is extraordinary. Frankl, a Jewish psychiatrist from Vienna, was sent to Auschwitz as a slave laborer, and survived. From that experience, Frankl developed a theory about how people can find meaning in life, even in the most desperate circumstances: through work, through love or through courage and dignity in the face of adversity. Frankl believed, based on his observations in the concentration camp, that this sense of meaning, of belief in something larger and more important than the present moment, was more essential to survival than food or medicine.

That’s a pretty strong vote for faith. And while I wouldn’t put myself in the mystical camp just yet, I’ve traveled a long way from where I started. Engaging your creativity will do that, as anyone who makes art will tell you. Art is hard work – I would never want to suggest otherwise – but creativity itself is mysterious and inexplicable, even to the artist. It is both within and yet somehow beyond our physical selves. In this sense it is a lot like love. Or even, dare I say it, like faith.