When I was in University, I had an incredible summer job as an intern at a big publishing house in Toronto. Incredible, not because it paid well, but because it took me inside the beating heart of book production, and books were and always had been my one true love.

Among other tasks, like operating the postage machine, I managed the ‘slush pile’, the name we gave to the ever-growing stack of unsolicited manuscripts that required a cursory review and response. This was, of course, back in the days before email submissions. We had an imaginary Acquisitions Editor, whose name I cannot reveal even to this day, and aspiring authors would write long letters to him, and I would reply. Sometimes they would phone him, but he was always in a meeting.

Knee-deep in the slush pile one day, I was graced by a visit from the Editor-in-Chief, a brilliant and glamorous woman of whom I was entirely in awe. She asked about my progress. At that moment, I was drafting a rejection letter to an aspiring author in Iroquois Falls, who had penned a god-awful bodice-ripper (understand that I am not opposed to bodice-rippers in principle, but this one was ghastly).   Radiating positivity, I said something along the lines of: “I think it’s wonderful that so many people write, even if it ends up being just for themselves.” And she wisely replied: “People don’t write just for themselves. Everybody writes so that someone else will read it.”

And now that I’m a writer I can tell you she was absolutely right. We write because we are skilled at it, and because it gives us intense pleasure to line up the right words in the right order on the page, but mostly we write because we understand that the whole point of this business of living is to connect with other people, and the written word remains one of the most powerful connective tools ever devised.

You asked a great question in your last letter about drive and expectations. I’m going to defer that one to my next letter, as I want to think about it a bit more.

I will, however, take a stab at the question about how we know when it’s time to make a significant change in our professional lives. In doing so, I’m going to reveal a secret addiction. Here it is: I love Convocation speeches. I’m serious. I watch them on YouTube. And recently, I watched a Convocation speech by Neil Gaiman to a bunch of undergraduate Arts students, and it was fabulous.

In his speech, he talks about never having had a career plan, but rather an overarching life goal, which in his case was to make (eventually) a living as a writer of fiction. He imagined that goal as a mountain in the distance, and evaluated every career decision he made by asking whether it took him closer to the mountain or farther away. 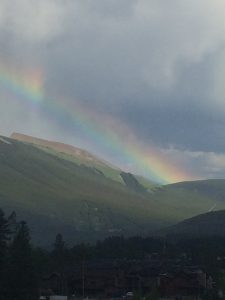 I love this metaphor. The mountain can be a specific job, but it can also be a set of professional aspirations, because often, even though we can’t identify the exact job we want, we can nevertheless describe the qualities that our ideal job ought to have (self-supporting, creative, in the public interest, international, and so on). And the idea of the mountain allows for this indeterminacy, because it permits many possible paths. The point is that you can be as non-linear as you need to be, as long as your path is moving you towards the mountain in the distance.

I’ve met so many people who struggle with professional dissatisfaction. Sometimes, the issue is that they genuinely don’t know what job would make them happy. These people (to play with the mountain metaphor) can see a whole range on the horizon, and they are overwhelmed. They know they have the ability to reach any one of the individual mountains in the range, but they are paralyzed by choice.

Other people know exactly which mountain they want to reach, but they don’t believe they can get there. The perceived risk of walking towards the mountain, of declaring themselves, is too great. Maybe they don’t believe they have enough talent to reach the mountain, or enough support from the people around them. Maybe they suspect that the cost of the journey will be too high, because it will disrupt the stability of core relationships in their lives.  And they may be right. Or not.

We can’t know. This seems like a bad thing from the perspective of people who like control, but it isn’t, necessarily. This is the road to a bigger life: the step out into the unknown, beyond the comfortable and the safe, beyond the things we already know we can do.

Whatever path you choose, I know there will be something amazing on it for you.

Reva’s response to this letter: http://www.revaseth.com/penpalproject/february-blues/