I loved your letter last week about your intention to make 2016 a Year of Deliberate Living.  In fact, re-reading it made me smile a second time, because (obviously) my response is late. At some point last week, I realized that I simply wouldn’t get it done on time. I rarely miss deadlines, and never without a good reason.

But I didn’t have a good reason. So much for Deliberate Living!  Sure, my book had just launched in the US, and I was fielding a lot of unexpected email traffic (I’m talking hours of email). A volunteer project got out of hand. My ex was away, and I was doing a huge amount of driving (we normally split the school drop off and pick up, an hour each way). My mom was also away, and she usually fills in for me if life gets particularly chaotic.

But really, I got overwhelmed. And eventually, I surrendered. And I’ve decided that I’m going to forgive myself for missing a deadline, because life is short, and my failure to meet a Pen Pal Project deadline isn’t the end of the world.

And life is so short! Two hugely influential artists (David Bowie and Alan Rickman) died last week, both of cancer, and both at the shockingly young age of 69. My friends were all talking about it. They were all doing the math: sixty-nine minus forty-something equals…way too soon. And these were men who, by anyone’s estimation, achieved great things with the time they had on this Earth. What about the rest of us?

Well, the rest of us need to learn how to take a few risks, and I’m not talking about the occasional missed deadline. We need to be willing to put ourselves out there, to step into the arena, and to court non-catastrophic failure. We need to do it in art, in work, in parenting, in friendship, and in love.

Yes, you heard me correctly. There is such a thing as non-catastrophic failure. In fact, most failure is not catastrophic. Most failure will neither ruin our lives nor kill us with shame. It won’t feel nice, but it will teach us things that success can’t. Believe me. 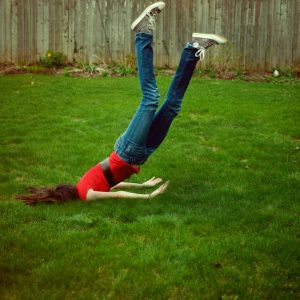 One of the lovely parts of my new career as a writer is that it connects me with all kinds of people I wouldn’t otherwise meet. Many of them want to ask me a question, and it is almost always the same one: What’s your secret?

I’m fortunate enough to have the kind of career that many people dream about. I feel grateful every day to be able to do the work I do. And I’m happy to share my secret, such as it is. Are you ready?  Because this is going to come in handy as you rocket towards that big birthday in a few months.

I’M PREPARED TO GO ALL IN, KNOWING THAT I COULD FAIL.

That’s it, really. I want to be a writer so much that I’m willing to fail at it.

When people ask me this question, I can see how reluctant they are to step into the void. There must be a safer path, they think. After all, what dream could be worth the risk of total, abject, humiliating failure?

And I would answer: Any dream worth having.